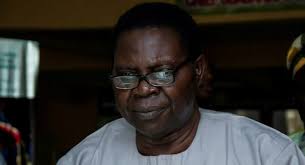 The 48-year-old son of the music maestro was reported to have died on Friday, July 29, 2022 and was buried the following day.

The cause of death was undisclosed.

However, the cause of Olayinka’s death has not been confirmed.

Sadly, this is not the first time the juju maestro will be thrown into a state of mourning. The octogenarian lost his 67 years old wife, Lady Juliana Obey-Fabiyi, on August 23, 2011.

The 48 years of marriage was blessed with four kids, three sons and a daughter.

Ebenezer Obey, fondly called Chief Commander has been one of the pillars of Nigerian music, he began his carrier in the mid-1950s