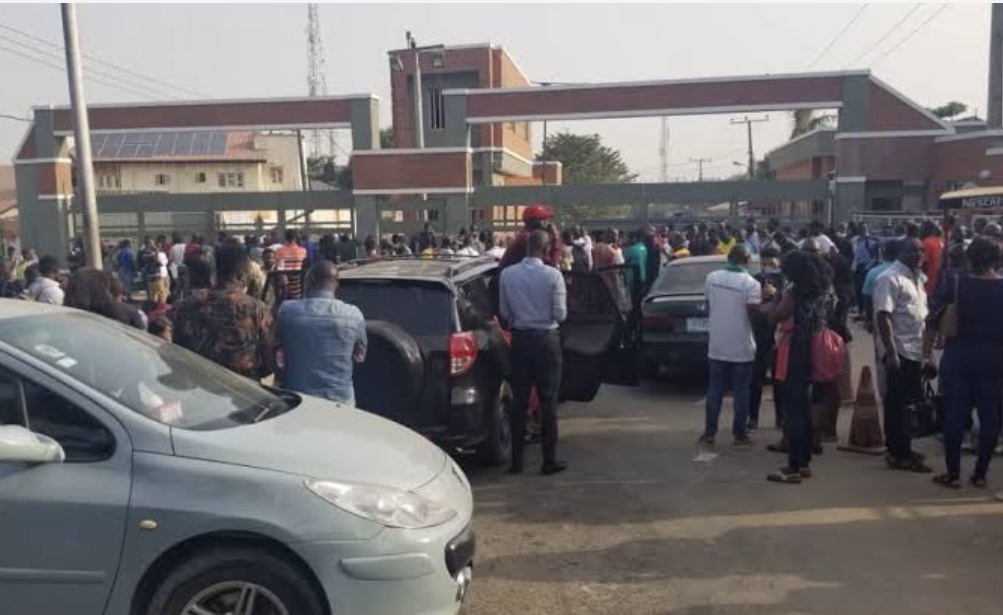 Two members of the House of Representatives from Lagos State, Ademorin Kuye of Somolu federal constituency and Rotimi Agunsoye representing Kosofe federal constituency on Tuesday condemned the involvement of the Attorney General of the Federation, Abubakar Malami, in the planned demolition of houses in Magodo GRA Phase 2, describing him as a “meddlesome interloper” who should be investigated.

Fedredsnews had earlier reported the threat of demolition of houses in the estate, with police and bulldozers deployed to the highbrow estate in December 21, 2021.

Residents of the area had protested the move, and the police had withdrawn from the estate after the state intervened.

The Lagos Sate government claims that the case dates back to the demolition of properties at Shangisha village between 1984 and 1985, after which a supreme court verdict ordered the state to give the Shangisha landlords 549 plots of land as a “matter of first priority”.

The state had, however, said by the court verdict, the Shangisha landlords cannot lay claim to land at the Magodo estate as the matter only relates to “allocation” and not “possession”.

In a motion on Tuesday signed by Ademorin Kuye of Somolu federal constituency and Rotimi Agunsoye representing Kosofe federal constituency, the lawmakers said Malami’s alleged involvement, as well as that of the inspector-general of police, should be probed.

“Cognizant that several attempts have been made by the Lagos state government from 2012-2015, to settle the matter amicably making different engagements with the judgment creditors presenting a proposal for reallocation in the Magotho Residential Scheme within the Badagry area of the state which some of them accepted,” the motion reads.Advertisement

“Informed that the Lagos state government again in 2016 initiated a settlement to reallocate Ibeju Lekki Coastal Scheme located in the Ibeju Lekki Area but this was rejected by the lead plaintiff, Chief Adebayo Adeyiga, as government continue to dialogue with majority of the judgment creditors to reach a concession towards implementing the judgment

“Worried that despite the ongoing settlement efforts and the pendency of an interlocutory injunction dated Dec 1st 2020 before the court of appeal seeking an order restraining him and his agents, Chief Adeyiga purportedly encouraged by the attorney-general of the federation and the inspector-general of police stormed the estate with unknown bailiffs and armed security operatives to execute a judgment that was purportedly delivered by Lagos high court.

“Worried that the execution being presently executed through the office of the AGF with the connivance of the IGP is illegal as only the Lagos state Deputy Sheriff can execute same and not thugs aided by policemen.

“More worried that the highhandedness and reckless show of force on the 5th of December, 2021 and the 4th day of January, 2022, in Magodo by Chief Adeyiga and his cohorts in blatant disregard to Order 8 Rule 17 of the Supreme Court Rules 2014 and Section 37 of the Enforcement of Judgment and Order Part III of the Sherriff and Civil Process Act, LFN 2004 can lead to loss of lives and properties and ultimately breakdown of law and order.

“Most Worried the Attorney General of the Federation is destabilising Lagos State by using his office to back this illegality as a meddlesome interloper and the instrumentality of state – the Nigeria Police Force and their illegal Court Bailiffs – to scuttle ongoing settlement between the Lagos state government, Magodo GRA 2 residents and the judgement creditors.”

The lawmakers are praying the house of representatives to “mandate the house committees on justice, public petition and Police to investigate the involvement of the attorney-general of the federation and the inspector-general of police in the attempt to destabilise the peace of Lagos state, scuttle the ongoing settlement process and enforce an illegality”.

The also asked the house to “recommend appropriate sanction for any officer found culpable in the illegal enforcement and break down of law and order”.

The motion, however, is yet to be presented before the floor of the house.