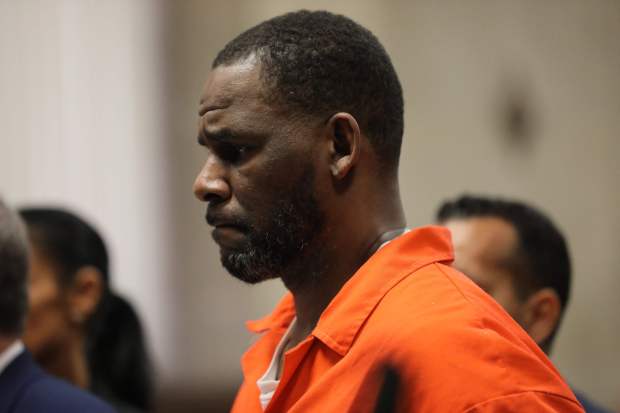 The singer now faces decades in jail after pleading not guilty to charges accusing him of sexually abusing over two decades.

wearing a mask – remained motionless with his eyes downcast as the verdict was read out loud.

A jury of seven men and five women found Kelly guilty of racketeering on their second day of deliberations.

Jurors began the day by sending the judge a note asking for transcripts of testimony by two former Kelly employees and for legal clarification.

Deliberations began on Friday at federal court in Brooklyn before the panel of seven men and five women took the weekend off.

The hitmaker, 54, best known for the 1996 smash hit I Believe I Can Fly, now faces decades behind bars.

The charges were based on an argument that the entourage of managers and aides who helped the singer meet girls — and keep them obedient and quiet — amounted to a criminal enterprise.

Several accusers testified in lurid detail during the trial, alleging that Kelly subjected them to perverse and sadistic whims when they were underage.

Kelly was also convicted of criminal counts accusing him of violating the Mann Act, which makes it illegal to take anyone across state lines “for any immoral purpose.”

The guilty verdict comes more than 10 years after the musician was acquitted of child pornography charges at an Illinois state trial.

A widely watched documentary “Surviving R. Kelly” helped force his case back into the spotlight.

Assistant U.S. Attorney Maria Cruz Melendez argued that Kelly was a serial abuser who “maintained control over these victims using every trick in the predator handbook.”

Prosecutors said accusers were under orders to call him “Daddy,” expected to jump and kiss him anytime he walked into a room, and to cheer only for him when he played pickup basketball games.

The accusers alleged that they also were ordered to sign nondisclosure forms and were subjected to threats and punishments such as violent spankings if they broke what one referred to as “Rob’s rules.”

Some said they believed the videotapes he shot of them having sex would be used against them if they exposed what was happening.

Some of the most harrowing testimony heard that Kelly gave several alleged victims herpes without disclosing he had an STD.

The court also heard he had coerced a teen boy to join him for sex with a naked girl who emerged from underneath a boxing ring in his garage.

Jurors were also told Kelly shot a shaming video of one alleged victim showing her smearing faeces on her face as punishment for breaking his rules.

One accuser said she was kept locked up and was drugged before he sexually assaulted her while she was passed out.

Other testimony focused on Kelly’s relationship with the late singer Aaliyah, who he married when she was just 15.

The defence labelled the accusers “groupies” and “stalkers.”

Kelly, born Robert Sylvester Kelly, has been jailed without bail since 2019.

The New York case is only part of the legal peril facing the singer.

He also has pleaded not guilty to sex-related charges in Illinois and Minnesota. Trial dates in those cases have yet to be set.