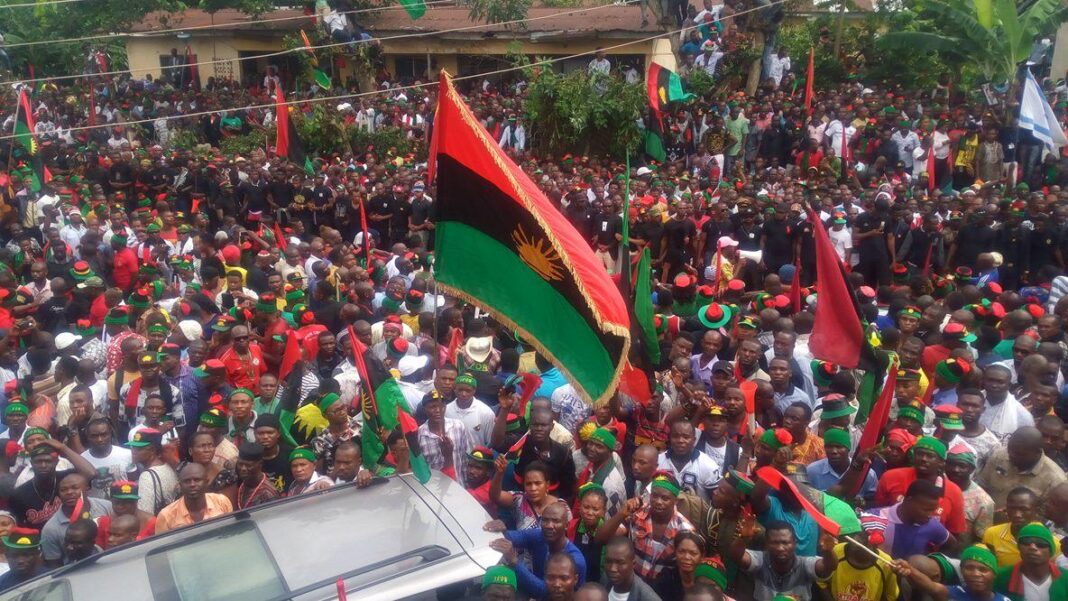 The Indigenous People of Biafra (IPOB) on Saturday kickstarted ‘operation no Nigerian as a show of their determination to secede from Nigeria.

The outlawed organisation also declared a total shutdown of the entire Southeast on October 1 which is Nigeria’s 61st independence anniversary.

The group also announced operation “no Nigerian flag” in all organisations in the region with effect from September 25, 2021, with the exception of commercial institutions.

In a statement from the Media and Publicity Secretary, Emma Powerful, IPOB stressed that there would be no movement in the zone on that day, calling for strict adherence to the directives to avoid regrets.

It urged world leaders to use the opportunity of the ongoing United Nations General Assembly, UNGA meeting to discuss the sufferings of the “two persecuted nations of Biafra and Ambazonia.”

The statement reads: “IPOB has declared 1st of October 2021 total shutdown in Biafra land as a sign of our rejection of the evil construct called Nigeria and there shall be no movement in Biafra land on this day.

“Also IPOB has declared from today 25th September 2021 that all Nigerian flag mounted anywhere in Biafra land must be brought down, Banks exceptional, IPOB leadership will communicate to Banks directly and give them a reason they must peacefully bring down Nigeria flag in their banking premises before we do it ourselves in our own way.

“Everybody must strictly adhere to this directive from IPOB leadership, we want to let the world know you that Biafraland is not Nigeria and shall not be. Don’t say I don’t know, a word is enough for the wise.

It added: “In line with the Memorandum of Understanding, MOU and alliance between Ambazonia and Biafra nations, we the global family of Indigenous People of Biafra (IPOB) under the command and leadership of our great leader, Mazi Nnamdi Kanu, wish to ask Biafrans to support and celebrate Ambazonia Independence Anniversary on October 1st 2021.

“It is, therefore, the delight of the Directorate Of State, DOS of our great movement, IPOB, that we inform Biafrans all over the world of this upcoming Independence Day Celebration of our great ally and neighbour, the Ambazonian people billed for 1st of October 2021.

“We advise Biafrans to stand with Ambazonia people as they celebrate their God-given freedom and independence. We should bear in mind that our brothers and sisters in Ambazonia are passing through persecutions in the hands of the murderous Cameroonian Government just like Biafrans are facing similar ordeals in the hands of Fulani controlled federal government of Nigeria that sympathatises with terrorists but kills peaceful agitators .

“We, therefore, urge world leaders to use the opportunity of the ongoing United Nations General Assembly, UNGA meeting to discuss the sufferings of the two persecuted nations of Biafra and Ambazonia. Our people have suffered enough in the hands of our oppressors who are in bed with terrorists but derive pleasure in crushing peaceful agitators instead of addressing our genuine concerns.”