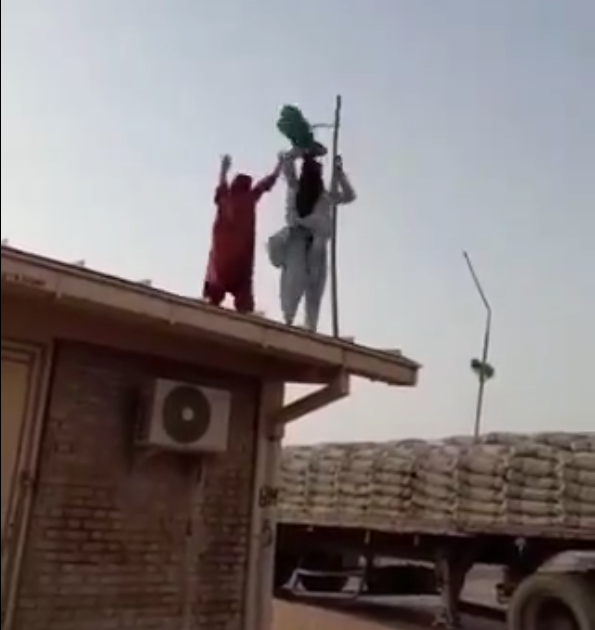 THE Taliban today claimed to have control of 85 per cent of Afghanistan after seizing a key checkpoint on the border with Iran.

Fighters tore down the Afghan government flag at Islam Qala hours after Joe Biden’s speech defending his decision to pull out all US troops.

Taliban militants have waged a major offensive in recent weeks, seizing swathes of territory, forcing thousands of soldiers to flee or surrender and capturing an arsenal of US heavy weapons.

They have been allowed to run rampant as the US, the UK and other nations withdraw the last remaining troops after almost 20 years of war.

Chants of Allahu Akbar can be heard as they tear the national flag from its pole.

The Afghan government immediately vowed to retake Islam Qala, the main crossing point for traded goods worth millions of dollars a month.

“All Afghan security forces including the border units are present in the area, and efforts are underway to recapture the site,” interior ministry spokesman Tareq Arian said.

Seizing the town completed a huge arc of territory from the Iranian border in the west to the Chinese frontier in the east.

Today a Taliban delegation in Moscow claimed the group now has control of 250 of Afghanistan’s 398 districts – which the Kabul government disputes.

Hours earlier, Joe Biden admitted it was “highly unlikely” the Kabul government would be able to control the entire country.

But he insisted he was right to end all US operations in August 31. Almost all western troops have already left, including Britain’s.

The 20-year war in Afghanistan has cost the US nearly $1trillion since the 2001 invasion to drive out the Taliban and Osama bin Laden’s al-Qaeda.

But Mr Biden claimed the mission was a success as the country has not been used to launch any attacks on the West since 9/11.

The president said of the pressure to continue the deployment: “The status quo is not an option.

“I will not send another generation of Americans to war in Afghanistan.”

Earlier this week US forces quietly left Bagram airbase, once the centre of operations with 10,000 personnel stationed there.

They did not tell Afghan comrades they were going and set the lights on a timer to switch off 20 minutes after the last plane took off, the BBC reported.

That came after the Taliban seized hundreds of armoured trucks and artillery units left behind by American forces.

Some US intelligence analysts fear the Taliban could seize control of the country within six months, according to an assessment distributed to officials in June.

The Kabul government is now desperately trying to defend a string of provincial capitals, which have to be supplied by air after militants seized the surrounding countryside.

On Friday Russia said the Taliban now had control of two-thirds of the border with Tajikistan.

Five districts in Herat fell without a fight, and more than 1,000 Afghan troops fled into Tajikistan to escape a Taliban onslaught.

Moscow fears the turmoil could allow Islamist terrorists to penetrate into the former Soviet states of Central Asia, which it considers its backyard.

But the Taliban insisted they did not pose a threat to the wider region and they would “take all measures” to stop ISIS from operating in Afghanistan.

President Ashraf Ghani has insisted Afghan security forces can keep the Taliban at bay without help from NATO.

On Wednesday his officials claimed troops had recaptured government buildings in the western city of Qala-e-Naw – the first major provincial capital entered by the Taliban in their summer offensive.

Millions of Afghans fear fresh bloodshed or brutal oppression if the mullahs are allowed to take charge again.

Earlier this week women took to the streets with rifles and rocket launchers telling the Taliban they were “ready for a fight”.

And it is feared the nation could become a new haven for terrorist forces wanting to strike out against the West.