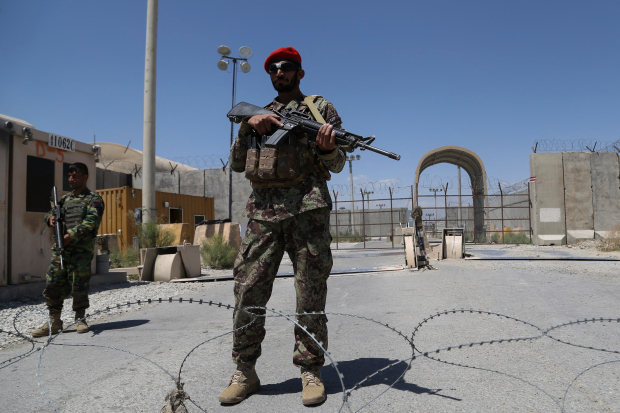 HUNDREDS of soldiers have fled Afghanistan to escape Taliban forces as the terror group sweeps through the country and leaves it on the verge of collapse.

The Taliban has unleashed a reign of terror in recent weeks and seized control of dozens of areas after American troops left on Friday.

The jihadis are now preparing to move on the capital Kabul after Afghan troops surrendered and retreated.

Over 300 military personnel fled into neighbouring Tajikistan to escape the group’s advance.

Emergency government talks with anti-Taliban leaders are now underway as the terror groups’ march through the country has already caused the fall of 10 districts in Badakhshan province.

Mohib-ul Rahman, a provincial council member, told AP: “Unfortunately, the majority of the districts were left to the Taliban without any fight.”

He added that in the last three days, out of the 10 districts which fell to the Taliban, eight were without a fight.

The terror group has seized control of a third of the country – and most of that territory was captured in the last two weeks.

The people of Afghanistan now face being plunged back under the Taliban’s brutal rule – with strict versions of Islamic law and punishments such as beheading and torture.

Oppressive new rules have already been slapped on districts in the country’s northeastern province of Takhar after the Taliban seized control this week.

The last US forces left Afghanistan’s Bagram airfield on Friday after 20 years in the war-torn region.

And some experts fear the withdrawal of American troops risk leaving behind a nation on the verge of disaster.

General Sir Richard Barrons, a former commander of joint forces command, told The Times that Afghanistan is at “grave risk of collapse”.

He said: “We might argue that much more money, many more soldiers and a lot more time could have helped Afghanistan settle into a peaceful, modernising state — but that is academic: we are walking away from fighting for it.”

Meanwhile, US General Scott Miller has warned the country is on the verge of “civil war” as Taliban militants have seized more than one third of Afghanistan.

“That should be a concern to the world,” said General Miller.

And it is feared the nation could become a new haven for terrorist forces wanting to strike out against the West, with The Sun Online revealing concerns new training camps could be operational by September

Professor Anthony Glees, from the Centre for Security and Intelligence Studies at the University of Buckingham, said the Taliban are now “back with a vengeance”.

And meanwhile Robert Clark, from the national security think tank Henry Jackson Society, warned other terror groups such as ISIS will look to stake their claim to Afghanistan.

He said while the Taliban may attempt to stick to peace terms agreed with the US – promising the nation will not be a haven for terrorists – other jihadi groups do not have to stick to such pledges.

Mr Clark told The Sun Online: “Whether [the Taliban] will stick to that is another question but they will be likely to do so to avoid US troops returning but it doesn’t mean they can control other terror groups, such as ISIS, who will look to take advantage and will look to recruit and train there.

“They hold no such agreement. It could become a terror battleground.”