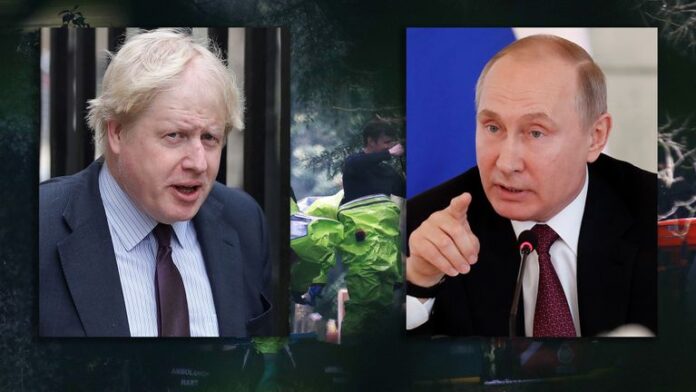 Russia has vowed to sink British warships the next time they sail too close to Crimea.

It comes as tensions rise following yesterday’s face off in the Black Sea where HMS Defender was accused of making a “deliberate provocation” by the Kremlin as it entered waters deemed to be Russian territory.

The 8,500-ton ship had been placed on red alert on Wednesday when, according to Putin’s defence ministry, the Royal Navy ship crossed Russia’s maritime border near Cape Fiolent.

The Navy remained undeterred despite being buzzed by 20 Russian jets and chased by two armed coastguard vessels where crews opened fire – dropping four bombs from aircraft above.

Today a fresh warning arrived from the deputy foreign Sergey Ryabkov who warned that Moscow would not tolerate another alleged breach of their waters.

He said: “We can appeal to common sense, demand respect for international law.

“If this does not help, we can bomb not only in the direction but also on target, if our colleagues do not understand.

“I warn everyone violating the state borders of the Russian Federation under the slogan of free navigation, from such provocative steps, because the security of our country comes first.”

A Ministry of Defence spokesperson denied that the bombs were dropped in the path of the British warship and that the shots were directed at it.

The confusion around the incident prompted accusations from former Chief of Defence Intelligence Lord West that Vladimir Putin was “playing to the home audience,” adding this behaviour was “apalling.”

“The bottom line is Putin is an expert at disinformation and his actions are very reckless, and we’ve seen that now for three or four years,” he told LBC.

“There’s no doubt the (HMS) Defender was asserting her right of innocent passage from one port to another.

“Putin wants to play to his home audience, he wants to tell them ‘aren’t I tough, look at that, I’ve made Britain go away’, and that’s why I think they lied about firing warning shots at the defender – which they didn’t do.

“As per usual, I’m afraid, Putin’s organisation is lying about that.”

Meanwhile, British media painted a different story, reporting that when the warship approached the waters, the crew was confronted by a tiny Russian boat.

According to reports, a Russian sailor shouted “if you don’t change course I’ll fire” at the massive UK vessel.

The Russian boat then reportedly opened fire twice – once at 12.06pm and again at 12.08pm – before fighter planes were ordered in.

Jonathan Beale, the BBC’s defence correspondent, was on board the HMS Defender when the shots were reportedly fired.

“We did hear some firing in the distance but they were believed to be well out of range,” he said.

As HMS Defender sailed through the shipping lane it was buzzed by Russian jets.

“The Captain, Vincent Owen, said the ship detected more than 20 military aircraft nearby.

He added: “Commander Owen said his mission was confident but non-confrontational.”

But, foreign minister, Ryabkov denied this version of events, reiterating his belief that Britain had planned to make the move.

Ryabkov said: “We are outraged by their [the UK’s] behaviour, and we would like to note that balancing on the brink of confrontation is fraught with very serious consequences for those who plan such events and then try to carry them out.”

“This is a very serious situation, we condemn the actions of the British side.”

“The territorial integrity of the Russian Federation is inviolable.

“The inviolability of its borders is an absolute imperative, and we will protect all this both through political-diplomatic and, when necessary, military methods.”

Meanwhile, Russian media backed up the minister’s claims, dismissing the report the BBC’s reporting of the incident.

The British version was a “falsehood”, said Channel One, while Gazprom-owned NTV said: “In Russia, these statements are regarded as yet another lie, which gives reason to believe that such incidents are deliberately provoked by the West in order to find more reasons to put pressure on (Moscow).”

Rossiya 1 reported: “The British military made a knowingly false statement that there had been no incident.”

Presenter  Igor Kozhevin told viewers: “The UK and NATO as a whole want to remind Russia that they do not recognise Crimea as Russian.

“We are aware of their opinions.”

The latest dramatic incident comes as Ukraine is reportedly seeking to enter NATO in what would be a major blow to Putin.

Ukraine and Russia have been at odds ever since Moscow annexed Crimea from Kiev in a move that received international condemnation.

It has since allegedly been supporting rebel groups fighting in eastern Ukraine and has been accused of plotting further land grabs.

Ukraine will hope NATO membership means they can call on the full backing of the US and UK to see off Putin’s bully-boy tactics.

Putin massed tens of thousands of troops on the border with Ukraine earlier this year, sparking fears of an invasion.

The issue was discussed by Putin and US President Joe Biden at their summit last week, but little progress is believed to have been made.

Ukrainian president Volodymyr Zelensky estimates that more than 90,000 Russian troops remain along their borders and said tensions could still escalate.

Kiev has been battling pro-Russia separatists in the eastern Donetsk and Lugansk regions since 2014, following the annexation.

Speaking after his summit with Putin in Geneva, Biden described talks as “positive” – but divisions remain between the West and Russia.