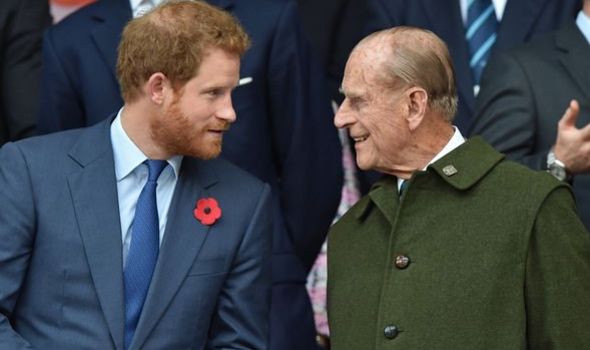 PRINCE Harry arrived back in Britain today for the first time since Megxit to attend his grandfather’s funeral.

An eye witness told The Sun he got off a British Airways flight from Los Angeles which arrived at Heathrow at 1.15pm.

Wearing chinos, a jacket and black face mask, he was met by security off the plane and put into a black Range Rover and whisked away.

Police cars were also seen on the tarmac for his arrival.

Sources confirmed he was due home imminently to quarantine in time for the Duke of Edinburgh’s farewell service.

It is thought he was driven to Kensington Palace where he could stay at Nottingham Cottage – the home he and Meghan lived in together before they were married.

Harry was at his £11million Montecito mansion when he told the news Prince Philip had died onFriday morning.

Sources close to the couple said Meghan, 39, wanted to join her hubby was advised against travelling by her physician as she is pregnant.

A black Cadillac Escalade was seen leaving their home on Saturday evening taking him to Los Angeles airport where boarded an early hours flight for the 10-hour journey back to Britain.

An eyewitness told The Sun: “He landed at Heathrow today. I saw him getting into an escorted car.”

Harry’s arrival comes as the Royal family ordered a truce over the contents of the explosive Oprah Winfrey interview to focus on honouring Prince Philip.

The Queen has declared a two-week royal mourning period.

It is the first time Harry has been back in the UK since March last year.

An insider said: “A lot has happened since Harry was last with his family.

“Particularly the Oprah Winfrey interview which left many people open-mouthed.”

“But the focus of family conversations now will be the passing of Prince Philip and nothing else.

“The Queen has declared royal mourning for two weeks so quite it’s clear that is the focus of the family.

“Conversations will be private but focus is on emotional matters of dealing with a father and grandfather.”

It is thought Harry was driven to Kensington Palace in central London because his official home under the Megxit deal – Frogmore Cottage – has been handed to Princess Eugenie and Jack Brooksbank.

Harry will have to quarantine for ten days on arrival to the UK – although he can leave it after five days if he provides a negative test under the government’s ‘Test to Release’ scheme.

But he will be allowed to attend Philip’s funeral regardless – as government guidelines state those coming in from abroad can leave isolation “on compassionate grounds”.

The UK’s guidance adds: “This includes attending a funeral of a household member, a close family member or a friend.”

He must, however, continue to self-isolate until he has finished his quarantine period.

Harry, 36, will walk behind the coffin alongside Prince William and the rest of his family at Saturday’s funeral at St George’s Chapel.

He will not wear his military uniform after losing his official honorary titles honours in Megxit.

Instead he will wear a suit along with Prince Andrew and Prince Edward.

William, 38, and Harry, did not speak for several months after Megxit was finalised last January.

Speaking to Oprah, Harry described William and Charles as “trapped”.

But the Duke of Cambridge spoke to his younger sibling several days later although the call was leaked to CBS host and pal of the Sussexes Gayle King who said the conversation was “unproductive”.

The Queen ordered a family-led investigation into Harry and Meghan’s shock claims including allegations a senior royal raised “concerns” over Archie’s skin colour.

But by declaring a two week royal mourning period it is expected the Oprah row will take a back seat behind grieving for Philip.

Prince Charles is said to be “looking forward” to a reunion with his son.

A source told The Sun: “I’m sure Charles will be very happy to see his son.

“It’s been more than a year. The Prince is very much looking forward to seeing him.”

It is believed some of Harry’s multi-millionaire pals had offered the Duke their private jets for the 5,400mile cross-Atlantic flight.

But the prince has previously been blasted for using private jets.

Hollywood producer pal Tyler Perry lent Harry his plane to flee Vancouver for California just as the US border closed due to Covid-19 last March.

In response to the Oprah Winfrey show, the Queen in a statement said: “While some recollections may vary, they are taken very seriously and will be addressed by the family privately.

“During a service at Canterbury Cathedral earlier, which was also streamed online, Archbishop of Canterbury Justin Welby said that “for the Royal Family, as for every other, no words can reach into the depth of sorrow that goes into bereavement”.

The archbishop is also expected to lead the duke’s funeral on Saturday, which Princes William and Harry are both due to attend.