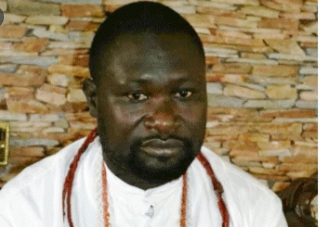 Emami dismissed the unveiling of Prince ‘Sola Emiko as successor to the Olu of Warri, Ogiame Ikenwoli, insisting that the revered Warri monarch has not joined his ancestors.

‘ No burials, marriages, dancing will hold across all Itsekiri communities for three months ”

‘There shall be no merrymaking of any kind anywhere in Iwere land. All Itsekiri sons and daughters must tie their wrappers upside down for the duration,” he said on Monday.

But the Ologbosere declared: ” The Olu has not joined his ancestors. As far as I am concerned, whatever was done today at Ode – Itsekiri was a kangaroo in search of power.

“The person that has the right to pronounce the transition of the Olu of Warri, whenever that happens, is the Ologbotsere, which I am till this moment by the grace of God.“I must add that the 1979 edict has not been amended to give any other person the right to pronounce the passage of the Olu of Warri, apart from the Ologbotsere “.