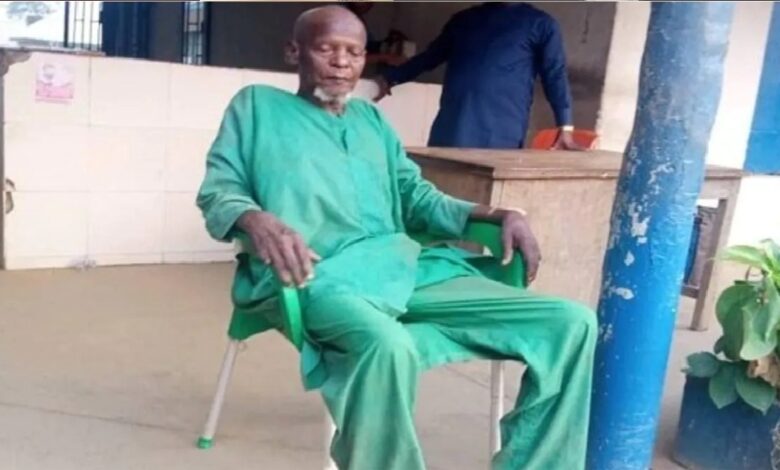 The long arm of the law finally caught up with Fulani terrorist, Iskilu Abdullahi Wakili as an Iyaganku Chief Magistrates’ Court sitting in Ibadan, Oyo State, on Tuesday, ordered that the alleged notorious Fulani warlord be remanded in a correctional facility.

The police charged Wakili alongside his sons Abu, 45; and Samaila, 27; as well as Aliyu Manu, 20; with six counts bordering on conspiracy, murder, kidnapping and armed robbery.

According to the News Agency of Nigeria, the Chief Magistrate, Emmanuel Idowu, who did not take the plea of the suspects for want of jurisdiction, remanded them in Abolongo Correctional facility in Oyo State.

Idowu ordered the police to return the case file to the Oyo State Directorate of Public Prosecution.

He adjourned the matter until May 17, for mention.

Recall that Fedredsnews had earlier reported that Wakili, dreaded and feared by farmers in Ibarapa area of Oyo State was arrested by operatives of the Oodua Peoples Congress (OPC).

The euphoria that greeted the arrest of the Fulani terrorist was almost marred by the Oyo State Police Command when three of OPC operatives that took part in the operation were arrested and detained, and subsequently accused of arson and murder. The Police then took Wakili to the hospital for treatment. This was roundly condemned by human rights bodies, the Afenifere and governor Seyi Makinde who promised to look into the matter.

Before Wakili’s arrest, farmers and residents of Ayete, Kajola, and neighbouring villages in Ibarapaland lived in perpetual fear of Wakili who was accused of displacing them from their farms, kidnapping their rich men, and raping their women.

A legal practitioner, Oritsuwa Uwawa, appeared for all the suspects.

Amos also said that on August 15, 2020, about 4pm in Idi–Emi, Oyo State, Wakili, and the others kidnapped a woman.

The police claimed that the suspects while armed with cutlasses and axes robbed her of N100, 000.

The offence, he said, contravened the provisions of sections 316, 324 and punishable under Section 319 of the Criminal Code of Oyo State 2000.