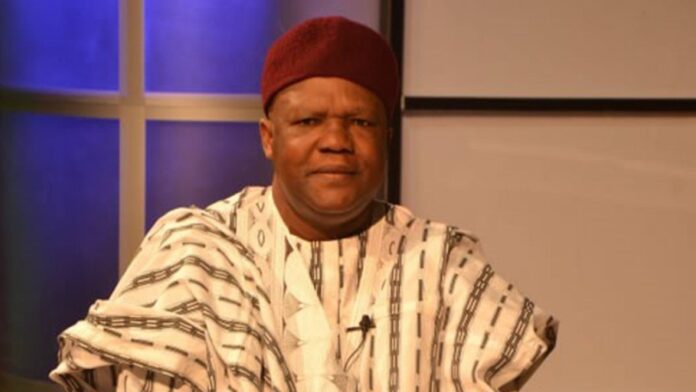 Awolowo’s shadow looms over our political firmament like a colossus. Had he been alive today, he would have been 112 this month. Chief Awolowo made the transition into the great beyond on May 9, 1987. He was 78. Avatar and visionary, he saw it coming and seemed to have prepared for it. During his 77th birthday, in March 1986, he told the world that he was celebrating “the imminence” of his transition to the life eternal. Only an avatar could have predicted his own death with such millennial calm.

For the last couple of years, the Awolowo Foundation has been commemorating the birthday of the great sage with an Annual Lecture. Last Saturday, it was delivered by the poet, journalist, iconoclast and public intellectual, Odia Ofeimun, who was once his Principal Secretary. The event brought together more than 500 people from all walks of life; from at home and abroad. Given the times in which we live, it was largely a Zoom affair.

The three distinguished guests on the occasion were: Professor Wole Soyinka, Chairman on the occasion; His Eminence, the Sultan of Sokoto, Royal Father of the Day; and Chief Emeka Eleazar Anyaoku, world diplomat and former Secretary-General of the Commonwealth of Nations. Awolowo’s daughter and last remaining offspring, Dr. Tokunbo Awolowo-Dosunmu, was a benign presence throughout. The Moderator was the no less illustrious Professor Michael Faborode, Vice-Chancellor of Obafemi Awolowo University, Ile-Ife.

In his welcome address, Chief Anyaoku underlined the two grim realities facing the nation: deepening poverty and worsening insecurity. He said that nobody in their right mind could disagree that things have not gone dangerously worse than ever before. He pointed out that everybody would gain from belonging to one stable, united and prosperous country instead of a fractured one, saying, “It is in the common interest of all the ethnic groups and component parts to sustain the oneness, for progress of the country”. Decrying the over-dominance of the federal centre at the expense of the federating units, Anyaoku advocated the Indian model of federalism instead of the American model that we adopted as the best hope for peace, stability and progress.

In his own remarks, Sultan of Sokoto, Muhammadu Sa’ad Abubakar, underlined poor governance as the principal challenge. He blamed insinuations, ethno-sectarian suspicions and provocative outbursts by influential citizens as among the things that are creating acrimony and embitterment. He warned that those stoking the embers of war probably do not know what war is. He said that, as a military officer, he did combat duties on the Pakistan-Afghan border and in ECOMOG in Sierra Leone and Liberia. He described war as being no option for Nigeria, reassuring the audience that, “No problem is beyond dialogue”.

The Guest Lecturer, Odia Ofeimun, spoke on the theme, “Whither Nigeria?”  In his opening lines, the poet went straight for the jugular. He criticised the President, Major General Muhammadu Buhari (retd.), for abandoning the project agreed by his political party and, instead, has been pursuing an illusory “cattle republic”. He condemned a situation whereby, under the full protection of our armed forces, alien Fulani militias with deadly military weapons, have been killing, raping and maiming defenceless communities, while dispossessing them of their lands. He noted that the country under the current regime had become what the Anglo-Polish novelist, Joseph Conrad, would have characterised as “the heart of darkness”. A situation where people were being asked to make the impossible choice between their ancestral homelands and their lives was an evil and unacceptable scenario.

Odia, however, concluded that Nigeria is worth fighting for. He argued that the best way to save the country is to re-design the federating units in a manner that accords full autonomy to our ethnic nationalities; advocating a “cultural mapping” of the Nigerian society instead of ruling through a caste system while pretending that we are a democratic federal state.

He also decried a situation whereby 20 million children in this country are wandering the streets instead of being in school. He pointed out that much of the rhetoric about the national budget, particularly for education, is nothing but a ritual. He underlined education as the key to liberation and social progress.

Ultimately, according to Odia, we have to plan our country all over again; describing it as one of Awo’s greatest legacies. “Awolowo was a great planner”, he revealed.

In his own privileged intervention, deposed Emir of Kano and former Governor of the Central Bank of Nigeria, Muhammadu Sanusi II, complained that we seem to be chasing shadows instead of focusing on “the real issues”. While conceding that some modicum of constitutional re-engineering is needed to devolve powers to the regions, he argued that the challenge is mainly economic. He observed that a bloated governmental machinery gobbles up on average 80 per cent of the annual budget while only 20 per cent is spent on capital expenditure. He also decried the cultural narrative about the challenge of education in the North, arguing that it is more a problem of politics and governance.

He revealed that, as Emir of Kano, he travelled through the towns and villages and discovered that the issue was not cultural but had to do with governance and public policy. He argued that right from colonial times, the British administrators did not want education for the North because they did not want to re-create the scenario in the Sudan where well-educated elites led by the Mahdi challenged their British overlords.

Odia begged to disagree. He recalled that former Sokoto Governor Attahiru Bafarawa once built many schools, but the buildings remained empty. But pupils were not forthcoming. Odia insists that challenge of education in the North is largely cultural.

For my part, I would argue that it is not a binary issue — it is both.

The Q & A session was very vibrant. One professor from a Northern university bewailed the fact that the so-called “Awoists” of today have almost nothing remotely resembling the sage’s golden ideals. Most are driven by money-politics and nothing else.

In his summary intervention, the Chairman on the occasion, Nobel laureate, Professor Wole Soyinka, expressed profound gratitude to the panelists and all those in attendance. He underlined that there is an incontrovertible consensus on the need for reforms, re-configuration and restructuring of our federation, pointing out that an overburdensome centre must devolve powers to the regions if our country is to survive and prevail. In lieu of such re-engineering, Soyinka urged the states to use the existing constitutional framework to wrest more power to the federating units and ensure prosperity and welfare to their peoples.

In my own humble contribution, I raised issues about what Awolowo would have done if he were alive today. We all agreed that he would have confronted the demons that are currently hell-bent on destroying our country. A genius of statecraft, he practised the discipline of “Mental Magnitude”; believing that the power of thought can overcome all temporal challenges.

I also made the point that victims have a right to defend themselves. Municipal and international law and the precepts of natural justice, equity and universal ethics prescribe that communities facing an existential threat to their very survival, have both a right and a bounden moral obligation to defend themselves if government is unable and/or unwilling to defend them.

The father of pan-Africanism, Edward Wilmot Blyden, wrote a famous essay on,“The Legacy of a Permanent Influence”. Awolowo was a Pan-Africanist who has achieved a permanent influence. Wale Adebanwi, Rhodes Professor of Race Relations at Oxford, called him a “recent ancestor”. He now belongs among the pantheon of Yoruba orishas alongside Obatala, Ogun, Sango, Erinle and Osumare. Philosopher, statesman, economist and lawyer, Awolowo belongs among the immortals of Africa.