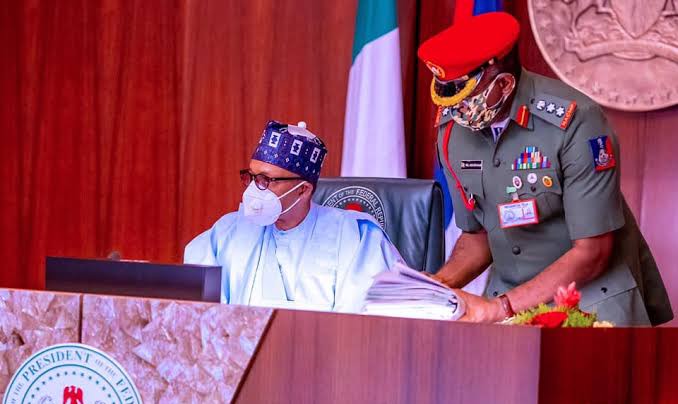 The former ADC, Colonel Mohammed Lawal Abubakar, who formally disengaged today will proceed on a five-month Strategic and Defence Course at Santiago, Chile from 8 March – 30 July 2021.

Fedredsnews had reported the appointment of Dodo last month to replace Mohammed Lawal Abubakar. Dodo was, until then, the Academy Adjutant of the Nigerian Defence Academy (NDA)

Abubakar, who handed over Monday after Dodo understudied him for almost three weeks to learn the ropes of his new assignment, conclude handing/taking over process and daily briefings accordingly, was accompanied by his wife and daughter, during brief ceremony.

He is due for the rank of Brigadier General after completing promotional course in Chile.

The course is a prerequisite for his next promotion to the rank of Brigadier-General in the last quarter 2021 and posting outside the shores of the country as a Defence Attachee/Adviser in keeping with the customs and tradition of recognising Officers that served as Aide-De- Camp to the President and concluded tour of duty without any blemish.

Abubakar, is the longest serving ADC to a civilian president (having served in that position for almost six years), and the second longest serving ADC in the history of Armed Forces of Nigeria after late Colonel Walbe who served General Yakubu Gowon for nine (9) years.

The 48 year-old ADC, who had served in various Army units and formations within and outside Nigeria at different capacities also recommended his successor by nominating three seasoned and trustworthy Army Officers to President Buhari, and the Commander-in-Chief picked Dodo.

Abubakar will leave for Santiago Chile on March 8.