‘We are a civilised breed of people, violence is against Yoruba values’ — Akeredolu reacts to Shasha crisis 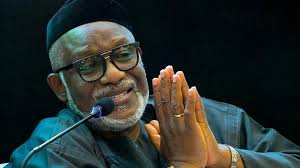 Rotimi Akeredolu, SAN, Governor of Ondo state, has urged all Yoruba speaking Nigerians, particularly those in Ibadan, to demonstrate the credentials of a breed of civilised people, saying violence is alien to Yoruba culture and values.

Akeredolu, who is also the Chairman of South-West Governors Forum was reacting to the ethnic crisis that engulfed the food commodity market of Shasha in Ibadan, Oyo State on Friday.

The clash said to be between Yoruba and Hausa residents of the area, reportedly claimed a number of lives and led to the destruction of property.

Condemning the crisis in a statement on Saturday, Akeredolu, who doubles as the chairman of the South-west Governors Forum, said the violence is against the values of the Yoruba.

He called on both parties to resist taking the law into their own hands while asking Yoruba indigenes to uphold the value of hospitality which they are known for.

Akeredolu wrote.“Without doubt, the situation we have found ourselves as a people is most despicable and contends violently against, and abhorrently at variance with the values and hospitality for which our people are known.

“We have been known for thoroughness. We have identified with legality over the centuries; and our ethos as a civilised breed of people are such that we do not identify with lawlessness, not even illegality.

“In this regard, we urge all indigenes of the South West to sustain these values and enviable virtues by remaining law-abiding. Our resolve in this direction is not a sign of weakness; it is indeed, the strongest of all.

“In particular, while I understand the height of provocation in the light of recent happenings as regards Shasha, Ibadan, I, alongside my other brother Governors in the Region are against the willful appropriation of Laws unto hands.

We do not support violence and in particular, brigandage, jungle justice and unnecessary self-help.”