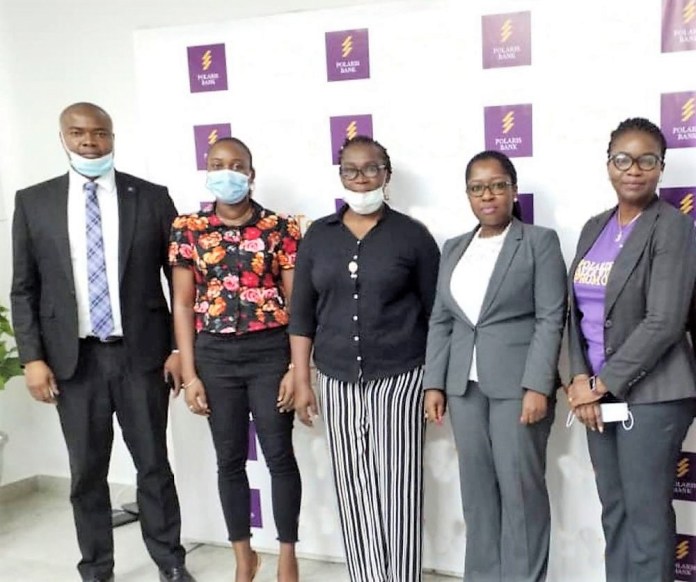 Polaris Bank has unveiled Mr Lucky Okunzuwa, a customer with the Bank’s Akpakpava branch, Benin, Edo State, as the first millionaire at the maiden draw of its ongoing nationwide Save & Win promo.

Other 60 lucky customers who also emerged from across the six geo-political zones on Tuesday, won N100,000 each during the draw which held at the Bank’s headquarters in Lagos. The promo ending in April 2021 is designed to enrich Nigerians with a N26 million pay-out

The winners emerged through a transparent draw witnessed by officials of the Federal Competition and Consumer Protection Commission, representatives of other regulatory agencies, as well as customers and relations of the winners. The draw was conducted using a hybrid media technology which enabled in-premises event whilst over 600 customers logged in through the banks virtual network and social media handles.

The promo is designed to make millionaires of everyday Nigerians by encouraging current and prospective customers of the Bank to save minimum of N10,000 monthly, for any three consecutive months within the promo period, starting from November 2020 to April 2021, to qualify and be part of the winners of the promo.

The first millionaire of the promo, Mr. Okunzuwa, said, ‘‘I am very delighted at winning one million naira in the Polaris Bank’s Save & Win Promo. It was like a dream, when I was told but this is a reality. The money will go a long way in supporting my small business to grow. I also make a commitment to continue to save more. I sincerely thank Polaris Bank for this novel initiative.’’

Speaking at the unveiling of the winners, Polaris Bank’s Executive Director, Lagos Business, Mr. Segun Opeke, while offering his congratulations, said the event was significant because it was a testament of Polaris Bank’s unwavering commitment to impact and enrich the lives of Nigerians, while noting that the reward is aimed at encouraging more people to save and invest their money.

Earlier in his opening remarks, Mr. Opeke said, “In tough times such as we are now, there is a compelling need to save, not only to win a prize, but also to plan for the rainy day. He noted that the Polaris Bank Save and Win Promo is a sure way to save more and also become either a millionaire or win N100,000. “The promo will produce 8 millionaires, while 180 others will go home with N100,000 each across 3 draws in February, March and April with winners drawn from the 6-geo-political zones of the country,” he added.

From the regulatory bodies, Ms. Susie Onwuka, of the Federal Competition and Consumer Protection Commission (FCCPC); Ezeani Daniel Abumchukwu and Akoji Elizabeth, both of Advertising Practitioners Council of Nigeria (APCON) and Peace Ibadin of National Lottery Regulatory Commission (NLRC), all attested to the free, fair and transparent draw that threw up the winners, commending the Bank for making good its promise to the winners.

In her contribution at the draw, the Bank’s Group Head, Product and Market Development, Adebimpe Ihekuna, emphasized that the promo is ongoing till April 30 and encouraged existing and prospective customers of the Bank to take advantage of the savings promotion to increase their savings; as well as get more money to invest especially for the low-income earners.

Following the first draw on Tuesday, February 9, 2021, in which the first set of winners emerged, the Bank will likewise announce and reward the second set of winners in March. The month of April will be for the Grand-finale leading to the emergence of 60 more winners of N100,000 each and six millionaires of N1million each, across the six geo-political zones, bringing the entire draw to a total of 188 winners.

Polaris Bank is a future-determining Bank committed to delivering industry-defining products, and services, across all sectors of the Nigerian economy