Go and sin no more…Ooni forgives Sunday Igboho, says he’s solidly behind him 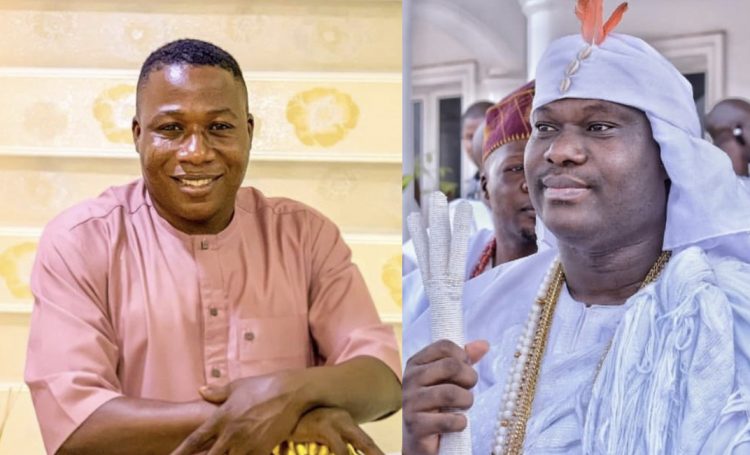 The spiritual father of the Yoruba race, Ooni of Ife, Oba Adeyeye Ogunwusi has forgiven rights activist Sunday Adeyemo alias Sunday Igboho, over the latter’s unsavoury remarks about the monarch’s handling of the meeting between him and President Muhammadu Buhari on the security challenges in the South West.

Ooni’s spokesman Moses Olafare made this known on Thursday, saying the reverred monarch was “still solidly behind” Sunday Igboho’s move to drive “criminal herdsmen” away from the south-west.

Mr Olafare explained that Oba Ogunwusi was silent on Sunday Igboho’s allegations because “it is not in the style of the Ooni to make an official response on any matter that threatens the unity and peace of the country, especially as it affects the descendants of Oduduwa worldwide”.

The activist had said Oba Ogunwusi disappointed himself by not properly presenting the herdsmen crisis in the interest of the Yoruba before President Muhammadu Buhari.

Sunday Igboho later apologised, saying he was pained by the issue and his tongue was caught up in the moment.

Olafare, however, said Ooni was unperturbed by Sunday Igboho’s abusive and derogatory words against him.

He said, “Sunday Igboho still remains a son to the Ooni. Baba has already forgiven him because he had tendered an apology via a video clip he produced via social media yesterday evening.

“The royal father could not bicker with any of his sons even in the face of quantum of provocations.”

He added: “As the father of all, the Arole Oduduwa Olofin Adimula remains his father who had even identified with him in the past two weeks he had begun with the struggle and he is still solidly behind him for the liberation of the Yorubas from criminal herdsmen who have adamantly terrorised our land. Just that he must watch his back so that people with ulterior motives will not hijack his movement.”