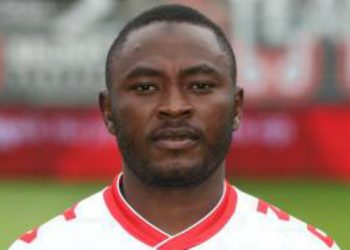 The attacking midfielder is currently a free agent having been released by Belgian club KV Kortrijk in October 2020.

Ajagun made just three appearances in the Belgian First Division A for Kortrijk this season before he parted ways with the club.

“Cape Town City are awaiting a visa for him to join the squad and do the medical,” Far Post reported.

Ajagun would be following in the footsteps of his compatriot Victor Obinna, who joined City in September 2017.

Former Nigeria international Obinna failed to make an impact at City as he netted just once in 12 PSL matches and he was released by the Citizens in February 2018.

Ajagun is a well-travelled player having started his career at Dolphins FC where he won the 2010/11 Nigerian Premier League title.

The diminutive player was then snapped up by Greek side Panathinaikos FC ahead of the 2013/14 campaign and he scored on his official debut against Platanias.

Ajagun helped Panathinaikos clinch the Greek Cup in his first season and the team also finished second in the Greek Suoer Lague in 2014 and 2015.

The 27-year-old has spells with Greek club Levadiakos FC and Dutch club Roda JC on loan from Panathinaikos.

His former coach at Roda, Yannis Anastasiou was behind his move to Kortrijk in July 2017 and he spent two-and-half years with the club before being loaned out to Cypriot side AC Omonia in January 2019.

Ajagun returned to Kortjik ahead of the 2019/20 campaign and he scored once in 18 matches in the First Division A.

The Port Harcourt-born player was part of the Nigeria team that finished second at the 2019 Fifa Under-17 World Cup finals – scoring twice in the tournament.

Ajagun went on to play in two Caf Under-20 Africa Cup of Nations (Afcon) finals and he captained his nation at the 2013 edition as they placed third.

As a result, Nigeria qualified for the 2013 Fifa Under-20 World Cup finals where he scored two goals against Portugal in their opening game.