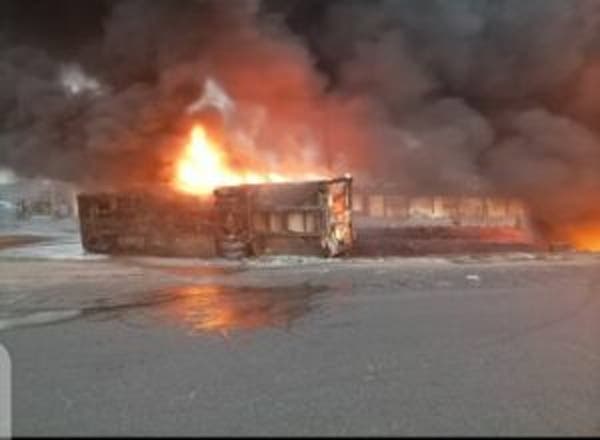 A tanker laden with petroleum product exploded on Saturday evening on the Otedola Bridge, Lagos.

It was gathered that the incident occurred at about 6.30 pm when the Rivers State Government-owned tanker was travelling outward Lagos.

Eyewitness account said one of the tyres of the tanker caught fire while the vehicle was on motion.

When passersby drew the attention of the driver, called Uche, to the burning tyre; rather than stop and attend to it, he reportedly reversed the tanker and in the process, hit a private car conveying a family of six.

Eyewitnesses told Fedredsnews that the occupants of the car that was hit by the tanker escaped unhurt; same for the driver of the truck and his motor boy

Men of the Lagos State fire service were seen trying to curtail the spread of the fire.

There is no official confirmation of any death as a result of the fire incident; but a passerby who claimed to have witnessed the explosion told Fedredsnews that at least, two lives were lost.