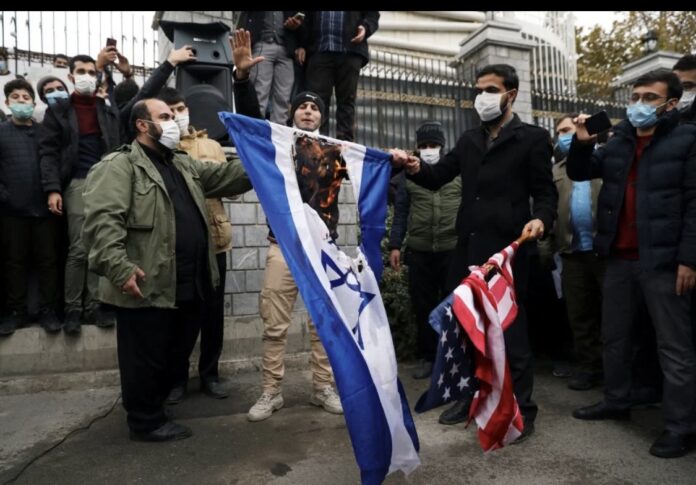 A SENIOR commander in Iran’s Revolutionary Guards has reportedly been killed in an air strike days after the assassination of the regime’s nuclear weapons chief.

Various reports in the Middle East say Muslim Shahdan’s car was targeted from the air on the border of Iraq and Syria.

It will stoke fears of conflict after Iran’s leaders vowed revenge for the death of nuclear scientist Mohsen Fakhrizadeh last week near Tehran.

High-tech parts of a remote-controlled machine gun are claimed to prove Israel was behind the elaborate Mossad-style hit.

The force that launched the strike on Shahdan has not yet been identified.

Iraqi security sources told Saudi-based al-Arabiya News that a drone killed him in a targeted strike on his car late Saturday or early on Sunday.

Turkey’s Andalou agency reports that unidentified warplanes targeted the commander and his three bodyguards near a village in Syria’s eastern Deir ez-Zor province.

The region was once an ISIS stronghold, but most of it was retaken by Bashar Assad’s forces with the help of Iran-backed militia.

It also holds strategically important oil pipelines is a major link between Tehran and its proxy forces in Lebanon.

Shahdan was a commander in the elite IRGC, whose Quds force is known to run shadowy militia operations in several countries targeting Western troops.

Its leader General Qasem Soleimani – one of Iran’s most revered figures – was assassinated in a US drone strike at Baghdad airport in January.

News of Shahdan’s death emerged hours after regime leaders repeated their vow of revenge at Fakhrizadeh’s funeral in Tehran on Monday.

Defence minister Amir Hatami said in the televised ceremony: “The enemies know that no crime, no terror and no stupid act will go unanswered by the Iranian people.”

And a hard-line newspaper run by one of the Ayatollah’s advisers called for a retaliatory attack on the Israeli port city of Haifa — in such a way as to guarantee “heavy human casualties”.

Meanwhile MPs chanted “Death to Israel and America” and protesters burned flags of the two countries and pictures of Donald Trump and president-elect Joe Biden.

Israel has not acknowledged killing the scientist, who was shot dead in a bomb and gun ambush that allegedly involved 62 operatives.

Experts say the execution bears all the hallmarks of an elite Mossad unit called Kidon — or “tip of the spear” in Hebrew.

Iran state media claimed a remote-controlled weapon made in an Israeli factory was mounted on a pickup truck that then exploded.

There are fears the assassination could provoke a revenge attack on the US.

The Pentagon moved the USS Nimitz carrier group into the Gulf days before the hit in Tehran, although it is not known if US knew about it in advance.

The warships and onboard jets will provide cover for the withdrawal of US troops in Iraq and Afghanistan, the US Navy said.

The President also sent B-52 bombers to the region amid the escalating crisis.