Umahi bombs Wike: You are the destroyer in chief of PDP 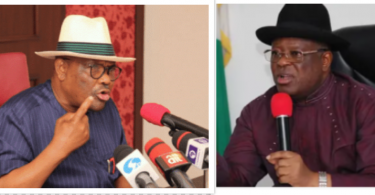 The Ebonyi State Governor, David Umahi, has described his Rivers State counterpart, Nyesom Wike, as a dictator whose actions are ‘destroying’ the Peoples Democratic Party (PDP).

Mr Umahi’s statement came on the heels of a statement credited to Wike who said Umahi’s defection to APC was for selfish interest, rather than to protect the interests of the Igbos as he claimed.

He said Mr Wike’s “dictatorial tendencies and overbearing influence on the party’s affairs had made other governors to be unhappy with him”.

He warned Mr Wike to desist from attacking him “as it would be very dangerous if both of them continue attacking each other.”

“There is nothing that happens in PDP without his authorisation. He once said that PDP National Working Committee members are beggars and bribe takers. I have asked him that let’s not take on ourselves or else it will be very dangerous.

“So let’s us face the party, the party does not belong to him. And this is by no means personal and he is demonstrating the dictatorial tendencies in him by taking on me, a fellow governor. And that is very shameful.”

Mr Umahi warned that more governors would leave the PDP fold “unless there is a change in the mode of doing things in the PDP”.

The Ebonyi governor also accused his Rivers counterpart of ‘remote-controlling’ the PDP.

“APC does more consultation. Anybody can contravene this that PDP working committee is being remote-controlled and that is the truth and it is very dangerous and all the governors know that.

“You (Wike) cannot stay in your state and you will be remote-controlling what happens in other states. Unless that changes you will see a lot of governors leaving the party,” he warned.

Mr Umahi also said he is not desperate to be president of the country, contrary to Mr Wike’s assertion.

He, however, said “he will be a happy man if a president of South-east is elected in 2023 even if that person is not him.”