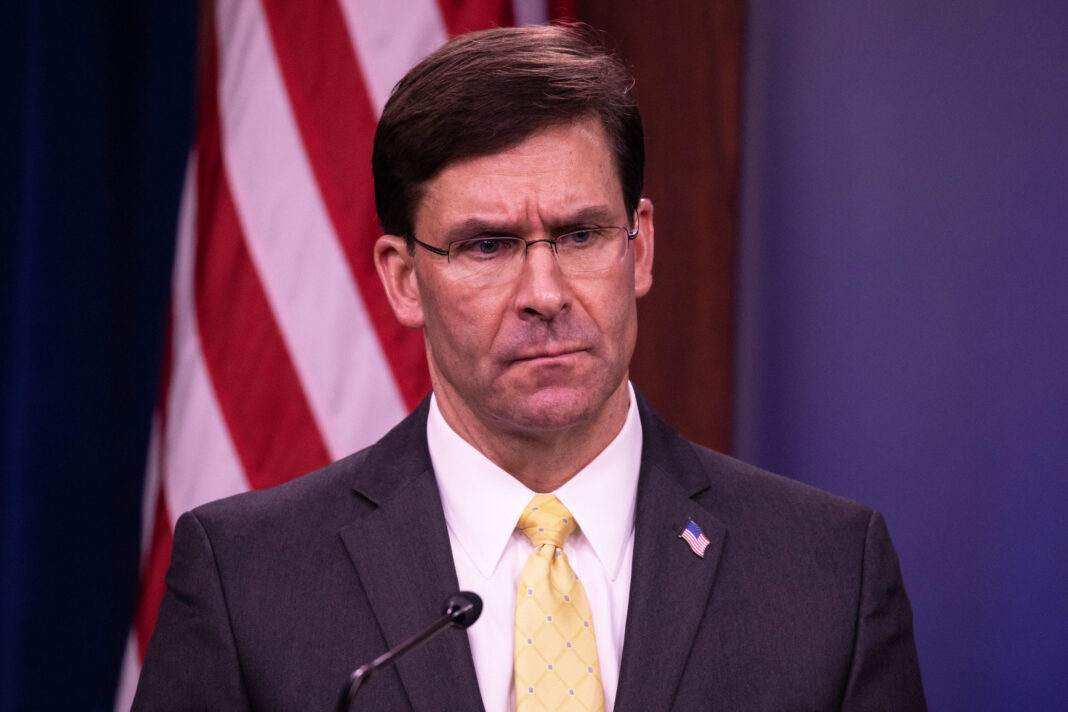 President Donald Trump announced on Twitter Monday that he has fired Secretary of Defense Mark Esper and that Christopher Miller, who serves as director of the National Counterterrorism Center, will become acting secretary “effective immediately.

“Esper’s increasingly tense relationship with Trump led him to prepare a letter of resignation weeks ago, an attempt to fashion a graceful exit in the widely expected event that the President decided to fire him, several defence sources, including one senior defence official, told CNN.

Tensions between Esper and Trump also played out publicly and had been simmering long enough that the defence secretary had prepared a letter of resignation weeks ago, aware that the President could fire him by tweet at any time.

Esper had been on shaky ground with the White House for months, a rift that deepened after he said in June that he did not support using active-duty troops to quell the large-scale protests across the United States triggered by the death of George Floyd at the hands of police.

Esper also said military forces should be used in a law enforcement role only as a last resort.

His remarks from the Pentagon briefing room were seen by many as an effort to distance himself from Trump’s threats to deploy the military to enforce order on American city streets and went over poorly at the White House, multiple people familiar with the matter said.

According to multiple administration officials, White House sentiment about Esper had been souring for some time, with both Trump and national security adviser Robert O’Brien viewing him as not entirely committed to the President’s vision for the military.

For months, Trump and O’Brien had been frustrated by Esper’s tendency to avoid offering a full-throated defence of the President or his policies, the administration officials said.

One administration source told CNN that Trump had no respect for Esper, leaving the defence secretary with little influence and little choice but to take his lead from Secretary of State Mike Pompeo.

Trump went as far as to mock his defence chief’s derisive nickname of “Yesper” during a news conference in August, a moniker bestowed upon Esper by defence officials who believed he did not go far enough in standing up to the President’s more controversial decisions.

Privately, Trump had expressed frustrations about Esper for months, venting about him at length during a trip to Camp David earlier this year, according to multiple sources.

Trump also publicly lambasted Pentagon leadership in September, accusing them of seeking to fight wars in order to boost the profits of defence contractors.

Meadows soon afterwards appeared on television and attempted to walk back Trump’s comments, saying his broadside against the Pentagon’s leaders had not been directed at anyone in particular.

Esper and Trump also differed over the highly charged issue of whether to rename military bases that honour Confederate generals.

Esper supported consideration of the renaming. The President refused to accept the idea.

The Senate voted 90-8 in July 2019 to confirm Esper, making him Trump’s second Senate-confirmed secretary of defence.

He followed James Mattis, who had resigned in December 2018 over Trump’s decision to retreat from Syria amid the fight with ISIS, abandoning Kurdish allies and pulling US troops out of the war-torn country.