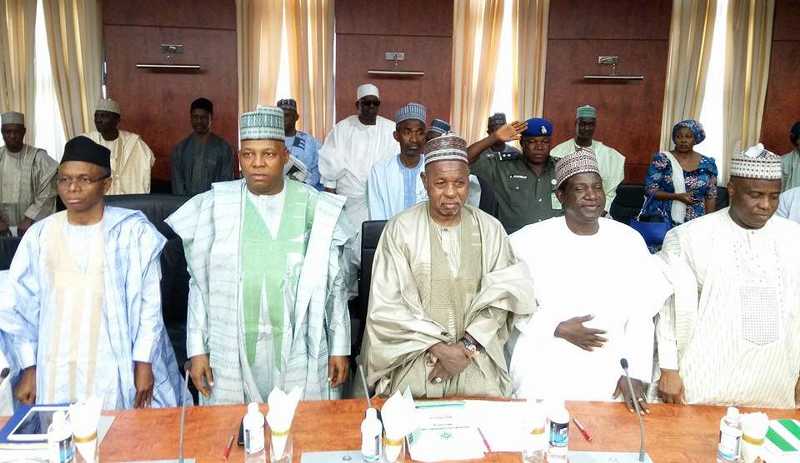 Governors of the 19 northern states, under the aegis of Northern Governors Forum, have reiterated their determination to ensure the indivisibility, indissolubility and oneness of Nigeria. They also reject and condemned the subversive actions of #EndSARS protests and alleged that subversive elements took over the peaceful protest to push for regime change outside the ballot box.

These, among other resolutions, were contained in a communique read by their chairman and governor of Plateau State, Mr Simon Lalong after a high-powered meeting at the Sir Kashim Ibrahim House, Kaduna on Monday.

Also present at the meeting was the Secretary to the Federal Government, Mr Boss Mustapha; the Chief of Staff to the President, Ibrahim Gambari; Ministers, Emirs and chiefs from the North, the IGP and other prominent personalities from the regime.

1. In furtherance to its resolution to further engage with the critical stakeholders of the North, the Northern States Governors Forum held a meeting today Monday 2nd November, 2020 at the Council Chamber, Sir Kashim Ibrahim House, Kaduna.

2. The meeting was attended by His Excellency, the Senate President, of the Federal Republic, the Honourable Deputy Speaker and other members of the National Assembly, the Chief of Staff to the President, the Minister of Federal Capital Territory, the Minister of Information and Culture, the Inspector General of Police, Principal Officers of the National Assembly, Chaimen of the Northern States Traditional Rulers Council led by His Eminence the Sultan of Sokoto amongst others. After extensive deliberations the following resolutions were arrived at:-

3. Appreciates the roles of Traditional rulers in containing the menace of Endsars protests in the north. Collectively agreed that traditional rulers be given formal roles in the govemance architecture of the Country.

4. The meeting rejects and condemns the subversive acțions of the Endsars Change protest. The superlative agitations and other change-regime actions outside the ballot Box soon take advantage of the peaceful protests to push for their separative agenda. The meetings endorse the indivisibility, indissolubility and oneness of the Nation.

5. The meeting took note of the devastating effect of the uncontrolled social media in spreading fake news. Therefore, calls for major control mechanism and censorship of the social media practice in Nigeria

6. The meeting raises attention on the need to keep strict watch on the Federal Capital Territory to guide against unwarranted and destructives protests to safeguard critical assets of the Nation.

7. Meeting commends the National Assembly and the Presidency in being proactive in addressing the issues of Endsars protests across the country.

8. Need to further push for amicable resolutions of ASSU strikes to enable students resume their studies,

9. Meeting resolved that there is a need for regular meetings of this nature. Calls for further engagement with other critical stakeholders such as Religious Leaders, Business community, youths leaders etc.

Accordingly, the meeting approved the setting up of two major engagement committees:

10. Appreciates the role of religious leaders, such as the Ulamas, JNI and CAN for their positive interventions in resolving the Endsars conflicts.

11. Calls for a collective effort in addressing the lingering challenges of the North e.g. Almajiri system, insecurity, illiteracy, poverty, etc

12. Commends the roles of His Eminence, Royal Highnesses and other Royal Fathers in ensuring that the Endsars protests did not escalate significantly in the North by adopting sentimental issues such as ethnicity and religion. The Forum resolved to continuously engage with their Royal Highnesses in addressing this challenge.

13. Meeting noted and appreciated the far-reaching efforts of Northern States Governors’ Forum in taking proactive measures to address the Endsars protest in the country and the North in particular. Equally Forum notes with satisfaction the actions taken by the Governors to revive the economic fortunes of the region particularly during the post-Covid-19 period.

14. Forum appreciates the roles of National Assembly in engaging the youths and other critical stakeholders of the Nation in resolving the Endsars conflicts.

15. Forum appreciates Mr President and his Cabinet for the quick intervention in meeting the demands of the Endsars protesters and resolved to give him maximum support as he reels out measures to address the lingering challenges of youth unemployment, banditry and Boko Haram insurgency in the country.

16. The Forum also appreciate the roles of the youth for their response to the Endsars, in curtailing the spread of hooliganism, thuggery and other separatist tendencies.

17. Forum appreciates the major reforms going on in the Police Force and pledges to support Mr President on this course.

18. The Meeting resolves to support the Nigerian Police Force to serve the Country better and calls for the strengthening of trust between the people and the Police.

19. The Meeting expressed concern over the low-level involvement of relevant stakeholders in the implementation programmes of Government and calls on the relevant Agencies to review implementation strategies to make for maximum impact and benefits.