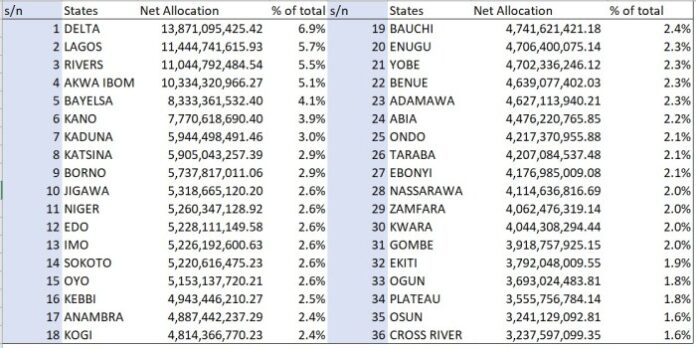 The Federation Account Allocation Committee (FAAC) disbursed the sum of N682.06bn to the three tiers of government in September 2020. This is contained in the latest monthly FAAC report released by the National Bureau of Statistics.

The report indicates that the federal allocation of N682.06bn disbursed to the three tiers (FG, States and LGAs) indicates a 1% marginal increase when compared to N676.4 billion disbursed in August 2020.

Analysts believe the marginal increase recorded in the disbursed federal allocation may be due to the rise in revenue generation, on the back of earlier improvement in both domestic and cross border economic activities.

Further breakdown of revenue allocation distribution to the Federal Government of Nigeria (FGN) revealed that the sum of N196.56bn was disbursed to the FGN consolidated revenue account; N4.78bn was disbursed as share of derivation and ecology; N2.39bn as stabilization fund; N8.03bn was for the development of natural resources; and N6.12bn to the Federal Capital Territory (FCT) Abuja.