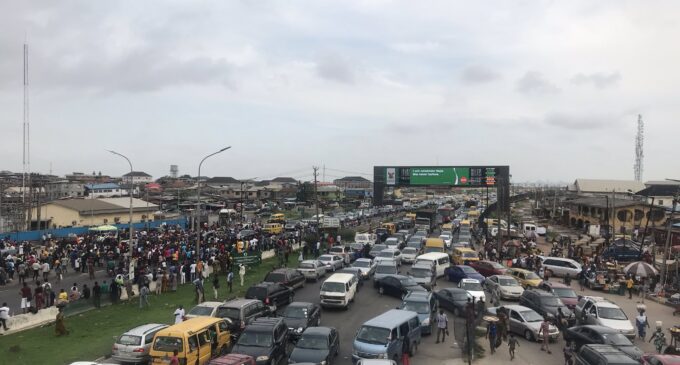 The Adekunle end of the Third Mainland Bridge in Lagos was, on Monday, taken over by anti-police brutality protesters.

This is coming as the nationwide protests, which enter day 12 today witnessed pockets of violence in Abuja and Edo States.

Fedredsnews learnt that while all vehicles were prevented from accessing the Third Mainland Bridge in Lagos, vehicles on emergency services were given free passage.

In Abuja, the police authorities deployed their men to break the ranks of the protesters with several of them flogged with horsewhips and getting injured in the process.

Soldiers were also sighted around AYA roundabout in the capital city, taking charge of traffic flow

The Oko Medium Security Centre, also in the state, came under heavy attack and a number of inmates were set free and valuables were reportedly looted by the thugs.

The surging hoodlums reportedly overpowered the armed guards in the facility before setting the inmates free.

The Oko facility has the capacity to accommodate 1300 inmates.

The attack on the Correctional Facility and the police stations forced the state governor, Godwin Obaseki to impose an indefinite 24 hour curfew in the state.