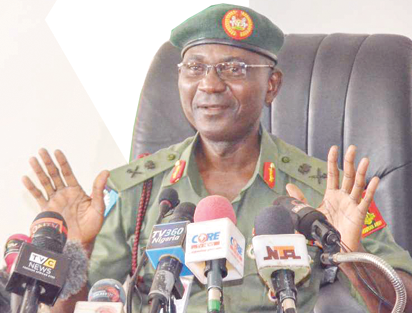 Following the public outcry that trailed its resolve to “deal with any situation decisively” and protect President Muhammadu Buhari and the Nigerian constitution at “all cost”, the Defence Headquarters on Thursday clarified that the warning by the Nigerian Army was not targeted at law-abiding citizens but to subversive elements who may want to explore the opportunity of the peaceful #EndSARS protest to destabilise the country.

Making this clarification was the Coordinator, Defence Media Operations, Maj. General John Enenche at a media briefing in Abuja.

Recall that Nigerian youths have been embarking on peaceful protests for eight days demanding an end to police brutality by the now-scrapped Special Anti-Robbery Squad of the Nigeria Police Force.

In deference to the protest, the dreaded anti-robbery unit was rechristened Special Weapons and Tactical Team (SWAT) which was described by many Nigerians as “new wine in an old wineskin”, and therefore unacceptable.

The protests have spread across states in the country, with citizens calling for a full reform of the police.