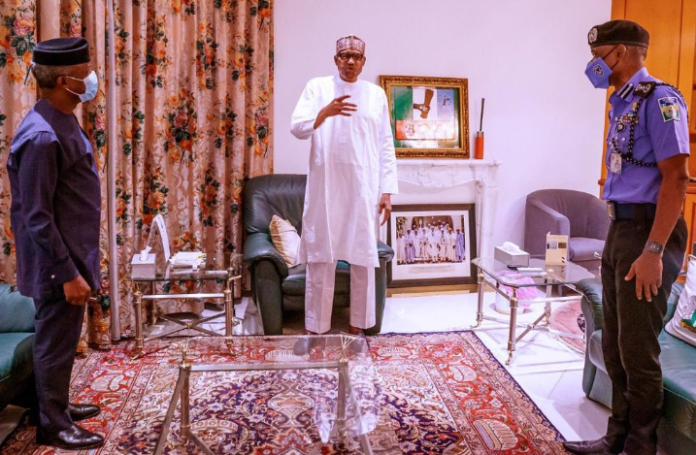 President Muhammadu Buhari has expressed his support for the Nigeria Police amid reports of widespread acts of brutality and human rights violations by police officers across the country.

Buhari said this on Friday night via his verified Twitter handle shortly after the Inspector General of Police, Muhammed Adamu came to brief him and Vice President Yemi Osinbajo on the reform efforts to end police brutality.

The president said the vast majority of men and women of the Nigerian Police are patriotic and committed.

He said: “I met again with the IGP tonight. Our determination to reform the police should never be in doubt. I am being briefed regularly on the reform efforts ongoing to end police brutality and unethical conduct and ensure that the police are fully accountable to the people.

“The IG already has my firm instructions to conclusively address the concerns of Nigerians regarding these excesses and ensure erring personnel are brought to justice. I appeal for patience and calm, even as Nigerians freely exercise their right to peacefully make their views known.

“The vast majority of men and women of the Nigeria Police Force are patriotic and committed to protecting te lives and livelihoods of Nigerians, and we will continue to support them to do their job

The protests which entered its third consecutive day today has enjoyed the support of celebrities, professionals and opinion leaders in the country and beyond.

The protesters, some of whom have been harassed, teargassed and brutalised by overzealous police officers in the course of the protests, are calling for the disbandment of the Special Anti-Robbery Squad (SARS), an elite unit of the Nigeria Police notorious for committing the majority of the recorded cases of human rights violations.

They are also demanding the overhauling of the nation’s entire policing structure.