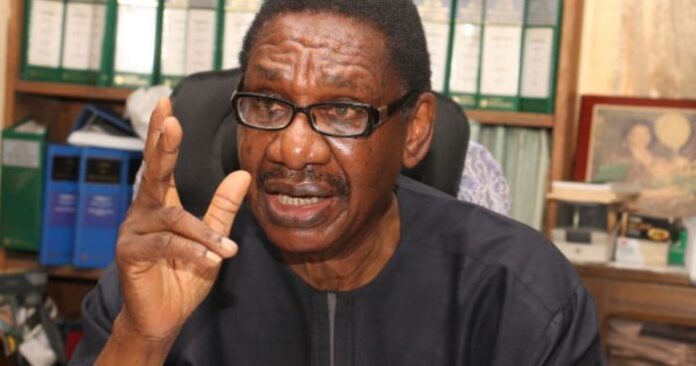 The Presidential Advisory Committee Against Corruption, led by constitution lawyer, Prof. Itse Sagay, SAN on Wednesday, rallied Nigerians and national assembly members against the amendment of the establishment Act of the Economic and Financial Crimes Commission.

PACAC, in a statement signed by Sagay, and released by the Communication Unit of the committee, said the planned amendment was part of “an on-going very sinister and dangerous attempt to demolish the anti-corruption infrastructure of Nigeria and return it to the situation it was in during the dark days before 2015.

The Senior Advocate of Nigeria added that those behind it “are the representatives of the corrupt establishment that brought this country to its knees and subjected us to humiliation as a result of an extremely negative reputation internationally”.

The controversial bill seeks to weaken the EFCC and its officials and confer an enormous power of control of the anti-graft agency on the office of the Attorney General of the Federation and Minister of Justice.

Although Sagay did not mention the name of the incumbent AGF, Abubakar Malami (SAN), as the sponsor of the controversial bill, he tackled the minister for what he described as his proclivity for aborting criminal cases in favour of major political and governmental figures.

He noted that the draft bill which intended to repeal the EFCC Establishment Act 2004, was being sponsored by those that were “too ashamed to put their names to the draft bill being circulated”.

Without mentioning the names of the alleged sponsors of the bill, Sagay described them as the “enemies of Nigeria”.

Malami, whose memo to the President, Major General Muhammadu Buhari (retd), triggered the ongoing probe of the suspended Acting Chairman of EFCC, Mr Ibrahim Magu, by the Justice Ayo Salami-led panel for various allegations of corruption, abuse of office, and insubordination, has been linked to the controversial bill in the media.

But the minister has neither denied nor confirmed the reports.

Citing various provisions of the bill, Sagay said it would eliminate the anti-graft agency’s “freedom and autonomy” and replace it with “an entity under the complete control of the Minister of Justice and Attorney-General”.

He added that the proposed bill would effectively turn the commission into a department in the Federal Ministry of Justice.