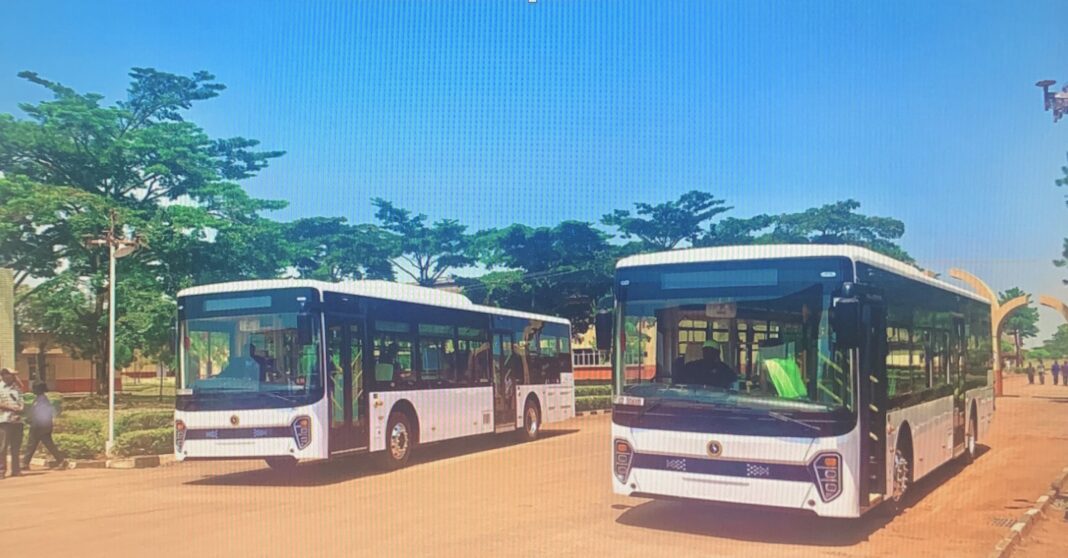 The road from Kampala, the capital of Uganda, to Jinja, the site of Africa’s first electric bus factory, was packed with cars on a July morning. The traffic crawled. Breathing hurt your throat. Kampala was the most polluted city in the world that day, according to OpenAQ, a global air pollution tracker, and much of that was due to vehicle fumes. The journey was a lesson in why it’s so necessary — and also so challenging — to move the continent’s vehicles away from petrol and diesel.

The 80km trip took two hours and wound through small villages, tea estates, sugar plantations and the giant Mabira rainforest. The factory is still under construction, but the new infrastructure needed to support the plant has already given local villagers access to new roads, power lines and water pipelines. It’s a key step to Uganda’s industrialisation plan.

“We are turning around an area whose main activity was light subsistence farming for seasonal crops,” says site engineer Alfred Niwamanya, pointing to the cane plantation and at the eucalyptus forest on the edges of the construction site. “We believe in the next three to five years the city will be here.”

State-owned Kiira Motors plans to have an initial manufacturing capacity of 5 000 vehicles per year, including buses, starting in July 2021. The company will be selling the buses to private and public companies that operate transport routes in and around Kampala, so its prices will need to be competitive enough to compete with other providers selling fossil fuel vehicles to the same clients. Kiira says it has not signed any contracts yet, but is in talks with several clients.

The government is hoping that 90% of the e-bus parts could eventually be made in Uganda. While manufacturing the lithium-ion batteries that power electric vehicles is a highly technical process that’s currently done mostly in China, some other parts of the bus can already be made locally, including the windows, air filters, frame and the 12V batteries that power the radio.

“We want to show we can make a machine of our own with Ugandan steel, lithium and copper, bamboo floors and banana fibre seats,” says Elioda Tumwesigye, Uganda’s science, technology & innovation minister.

Pollution is a major problem in Kampala that officials have been trying to address for decades. Most of the capital’s three million citizens travel on 14-seater minibuses or motorbikes that run on diesel and petrol. About 85% of Ugandan vehicles today are second hand, imported from other countries, dirtier and less efficient than similar models currently on the streets of Europe and the US.

The origins of the Kiira bus date back to 2007, when students and staff at Kampala’s Makerere University joined a global initiative led by the Massachusetts Institute of Technology to design a five-passenger plug-in hybrid vehicle. After that experience, students and professors kept working on their own project, and in November 2011 the Kiira EV, a two-passenger, fully electric car and the first to be designed and built in Africa, rolled off the assembly line. Following that, the company also produced prototypes for a five-seater car and an electric bus that charged itself in real time through solar panels mounted on its roof.

While Chinese batteries and know-how are allowing Uganda to develop its own electric vehicle industry, the country’s companies remain Kiira’s competitors. “Our biggest challenge, of course, will be China — the big players that make electric vehicles more efficient in pricing,” Tumwesigye says. At the moment, Chinese companies account for 99% of the global fleet of e-buses, according to Bloomberg NEF. The global e-bus market has grown to about 500 000 units last year, from 100 000 units four years ago.

The lack of electrification in sub-Saharan Africa means the electric vehicle revolution is advancing at a slower pace there, compared to other parts of the world, but in a few countries, policy is nudging it along.

Neighbouring Rwanda announced in May 2019 that it wants all motorcycle taxis to be electric and Volkswagen is assembling electric cars out of a plant in capital Kigali. Cape Town, in South Africa, is one of the cities that has signed the C40 Cities’ Fossil Fuel Free Streets Declaration, which commits to having zero-emission buses only starting in 2025. Car makers operating in the country are lobbying the government to drop import tariffs for electric vehicles and to roll out charging infrastructure.

Tumwesigye is determined to make the e-bus project more than a one-off. The government is contemplating listing the company on the stock exchange once it starts mass production of electric buses. And the plan is that people outside of Uganda will eventually ride them.

“It’s not the Ugandan market alone,” Tumwesigye says. “We are looking at African markets and beyond.”