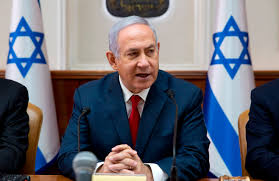 Annexation still on the table, Netanyahu says, but U.S. asked Israel to ‘temporarily postpone’ applying sovereignty to parts of West Bank in order to advance the peace agreement

Israel and the United Arab Emirates reached a historic peace deal on Thursday that will lead to a full normalization of diplomatic relations between the two Middle Eastern nations in an agreement that U.S. President Donald Trump helped broker.

Under the agreement, Israel has agreed to suspend applying sovereignty to areas of the West Bank that it has been discussing annexing, a joint statement by all three parties to the agreement said.

Trump, in a tweet, called the agreement a “HUGE breakthrough,” describing it as a “historic peace agreement between our two GREAT friends.”

The joint statement said the three leaders had “agreed to the full normalization of relations between Israel and the United Arab Emirates.”

“This historic diplomatic breakthrough will advance peace in the Middle East region and is a testament to the bold diplomacy and vision of the three leaders and the courage of the United Arab Emirates and Israel to chart a new path that will unlock the great potential in the region,” the statement said.

The peace deal was the product of lengthy discussions between Israel, the UAE and the United States that accelerated recently, White House officials said.

The agreement was sealed in a phone call on Thursday between Trump, Netanyahu and Sheikh Mohammed Bin Zayed, crown prince of Abu Dhabi.

The officials described the agreement, to be known as the Abraham Accords, as the first of its kind since Israel and Jordan signed a peace treaty in 1994. It also gives Trump a foreign policy success as he seeks re-election on November 3.

Prime Minister Benjamin Netanyahu said in a televised speech Thursday night that “Today marks a new era in Israel’s relations with the Arab world” and that the two countries agreed on “a full, formal peace.”

“For years, Israel has been portrayed as an enemy…now more countries will join us in this circle of peace,” the prime minister said.
He added that annexation is “still on the table,” and that it is a promise Netanyahu said he is “committed to.”

“Extending sovereignty will be done only alongside the United States,” Netanyahu said. “Without coordination, in the best case, will do nothing, and in the worst case, will harm relations between us. The United States asked that Israel temporarily postpone annexation.”

The joint statement by the three leaders said that as “a result of this diplomatic breakthrough and at the request of President Trump with the support of the United Arab Emirates, Israel will suspend declaring sovereignty” over areas of the West Bank that were envisioned in the U.S. Middle East plan unveiled by Trump in January.

“Israel for the foreseeable future will be focused on building this relationship and pursuing all the advantages that can come from having this new relationship with this country, and we also break the ice for doing more normalizations and peace agreements with other regional players as well,” one White House official told Reuters.

A senior political source told Haaretz that annexation is still on the agenda, and that Israel is committed to it. “The Trump administration asked that we temporarily postpone declaring [sovereignty over parts of the West Bank] in order to achieve the beginning of this historic peace agreement with the Emirates

A senior Likud official praised the agreement, saying: “The Israeli and international left always said that it is impossible to bring peace with Arab nations without peace with the Palestinian people. That there is no other way except from withdrawing from the ’67 borders, clearing out the settlements, dividing Jerusalem and establishing a Palestinian state. This is the first time in History that Prime Minister Netanyahu broke the paradigm of ‘land for peace’ and brought ‘peace in exchange for peace.'”

Meanwhile, Palestinian President Mahmoud Abbas said he “rejects and denounces the surprising announcement by Israel, the United States and the UAE,” and called it a “betrayal of Jerusalem, Al-Aqsa Mosque and the Palestinian cause.” A senior adviser to Abbas read the statement from outside the PA president’s Ramallah headquarters.

PLO Executive Committee member Dr. Hanan Ashrawi condemned the agreement and its terms on Twitter. “Israel got rewarded for not declaring openly what it’s been doing to Palestine illegally and persistently since the beginning of the occupation,” she wrote, referring to the annexation agreement. “The UAE has come out in the open on its secret dealings/normalization with Israel. Please don’t do us a favor. We are nobody’s fig leaf!”

‘A win for diplomacy’

UAE Ambassador to the United States Yousef Al Otaiba released a statement calling the agreement “a win for diplomacy and for the region” and “a significant advance in Arab-Israeli relations that lowers tensions and creates new energy for positive change.”

He added that the move “immediately stops annexation and the potential for violent escalation. It maintains the viability of a two-state solution as endorsed by the Arab League and international community. It creates new dynamics and possibilities in the peace process.”

Al Otaiba’s statement concludes with a reassurance that “The UAE will remain a strong supporter of the Palestinian people – for their dignity, their rights and their own sovereign state.  They must benefit from normalization.  We will forcefully advocate for these ends, now directly and bolstered with stronger incentives, policy options and diplomatic tools.”

Pompeo congratulated Israel and the UAE in both Arabic and Hebrew in a tweet, calling the agreement “a significant step forward for peace in the Middle East.”

In a statement, the U.S. secretary of state called the agreement “a remarkable achievement for two of the world’s most forward leaning, technologically advanced states, and reflects their shared regional vision of an economically integrated region. It also illustrates their commitment to confronting common threats, as small – but strong – nations.

The United States hopes that this brave step will be the first in a series of agreements that ends 72 years of hostilities in the region. Although the peace treaties between Israel and Egypt and Jordan have not yet fulfilled their full potential, since the 1978 Camp David Accords and the 1994 Wadi Arava Agreement, we have witnessed significant economic development in Egypt and Jordan, an unmistakable dividend of peace.”

Delegations from Israel and the United Arab Emirates will meet in the coming weeks to sign bilateral agreements regarding investment, tourism, direct flights, security, telecommunications and other issues, the statement said.

The two countries are expected soon to exchange ambassadors and embassies.

The agreement envisions giving Muslims greater access to the Al-Aqsa Mosque in the Old City of Jerusalem by allowing them to fly from Abu Dhabi to Tel Aviv, White House officials said.

The joint statement said the United Arab Emirates and Israel will immediately expand and accelerate cooperation regarding the treatment of and the development of a vaccine for the novel coronavirus amid the pandemic.