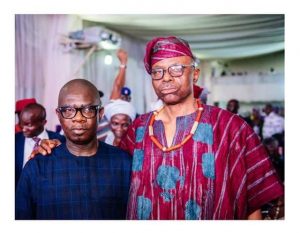 A handful of leaders from Ondo South senatorial district in Ondo State have thrown their weight behind the deputy governor of the state, Agboola Ajayi as the next governor of the state. They insisted that it is the turn of the district to produce the next governor and Ajayi, who was described by his boss, Governor Rotimi Akeredolu as “unreliable and disloyal”, is the best candidate for the number one job.

The leaders were drawn from the six local councils of Ondo South senatorial district. Led by the Lisa of Idepe in Okitipupa, Adekanbi Adegboola; others include Oladipo Ajani; Ismaila Olurimisi; Francis Igbasan, Dele Olatunji and Eni Akinsola.

They berated the two major political parties for picking the incumbent governor, Rotimi Akeredolu of APC from Ondo North and Eyitayo Jegede of PDP from Ondo Central.

They argued that their district is largely under-developed due to years of neglect, notwithstanding the fact that it produces the bulk of the state’s revenue.

“The North produced Adefarati for four years, Akeredolu for another four years. Mimiko spent eight years of the Central District bringing development to Akure, the state capital and other parts of the district. However, Agagu spent only four years leaving a balance of another four years for the zone. The South must produce the next governor and we have unanimously endorsed Agboola Ajayi as the candidate of the South for the October 10, 2020 election.

“The south has the economic power, competence and demographic spread to produce the next governor of the state and we will use it for Ajayi. We chose Ajayi because he is bold and did not chicken out when being faced with impeachment. We need somebody who will not sell the zone and that is why we zeroed on him”, they said.

The deputy governor, who survived impeachment attempts by the state House of Assembly for “anti-party activities and disloyalty” dumped the ruling APC in June due to what he described as “a poisoned space” which the governor has turned the party into.

Thinking that he would be able to displace well tested and better candidates who had been working tirelessly for the growth of the party in the state, he ran to the waiting arms of the party’s national leaders led by Uche Secondus. However, in a primary election that was described as free and fair, the party members rejected him and instead elected Eyitayo Jegede, SAN, as their flagbearer for the election.