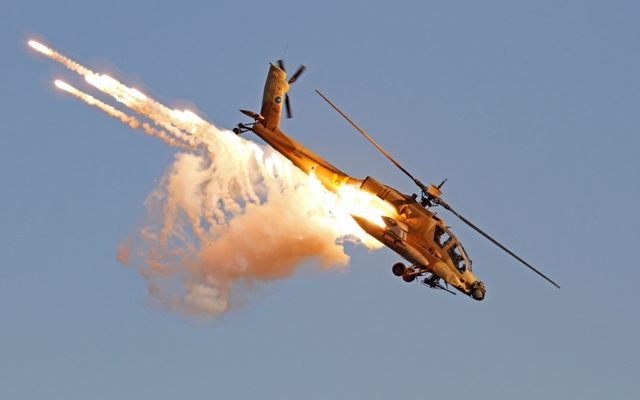 For daring to fire shots from Syria near the Golan Heights, Israeli combat choppers struck multiple Syrian positions on Friday.

According to the Israeli Defense Forces, the well-coordinated strike hit “observation posts and intelligence-gathering facilities located in Syrian outposts”.

“The IDF considers the Syrian regime responsible for today’s shooting,” continued the statement.

“Israel will act with determination and will deliver strong responses to any violation of the State of Israel’s sovereignty,” the statement concluded.

The strike arrived several days after an airstrike on Damascus, which groups such as the Syrian Observatory for Human Rights (SOHR) say Israel carried out.

Five foreign fighters were killed in that strike, including a member of the Iran-backed Hezbollah terror group, which operates freely in Syrian territory. The Iranian proxy has consistently vowed to retaliate when its fighters are killed in Syria.

In April, an Israeli airstrike in Syria killed nine fighters, a number of whom were identified as Hezbollah operatives or loyal to the terror group, reported SOHR.

Days earlier, an Israeli drone fired two missiles at a four-wheel-drive vehicle carrying two Hezbollah members, but neither were killed, according to a statement from the terror group.

Tensions along the northern border flare as Iran continues to be rocked by a series of mysterious explosions at sensitive sites, such as the Natanz nuclear facility, which sustained damage to the majority of its centrifuge production plants after the early July blast.